"Let's not get off track here."

"Oh, here we go, this is where the rubber hits the sky!" 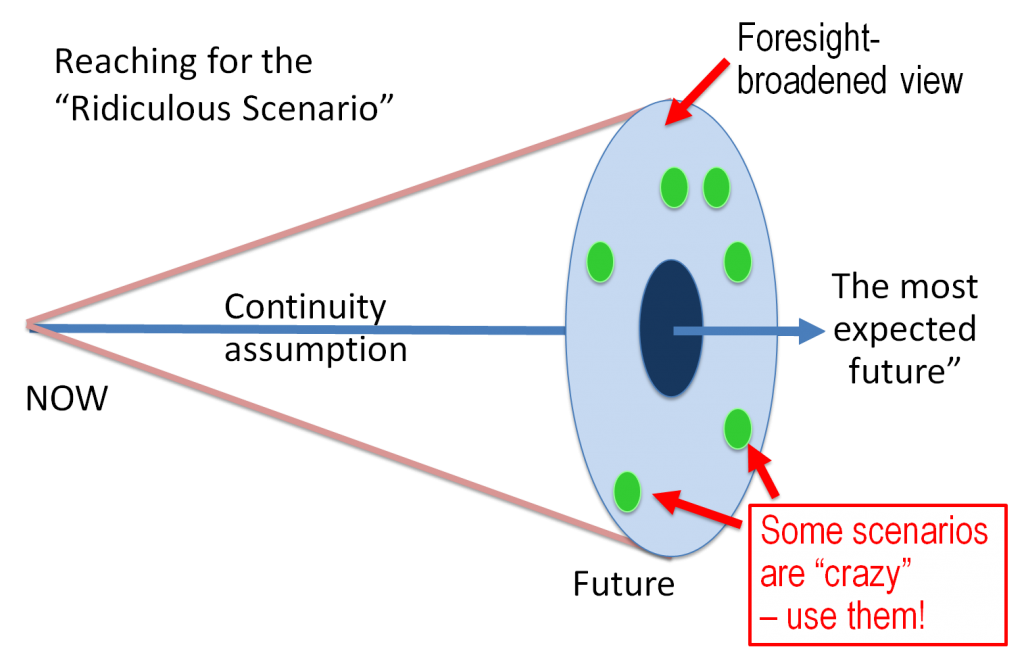 Of course, the ridiculous future is not often what we end up with. So why bother with it? To provoke better insights and action, we have to stretch our thinking. Rather than steer clear of an at-first-ridiculous idea, you should embrace it and play with it.

Until you’ve explored things that at first blush are “impossible” or “can’t ever happen” you haven’t explored the full landscape of meaningful, impactful change. The Wright Brothers told a incredulous world, after all, that humans were going to fly.

An example of a ridiculous scenario

“What if there was zero packaging?” We surely can’t manage unpackaged orange juice. But the concept lets you wonder about a future with far less packaging. Or a system for the containers we use with food and other products to be permanent and reusable. Or a marketplace in which packaging is no longer thought of as a nuisance and waste, but as an investment. So the ridiculous idea bears fruit. And it does so by leaping past thoughts of small-scale changes to show the potential for more transformational ones.

So take this as a cautionary to be sure we don’t too readily only see continuity, that we don’t miss significant threats and opportunities, that we don’t fail to explore the full landscape of possibility.

NOTE: For more on scenarios, see: Why We Need Scenarios to Be Ready for the Future.

A previous post is similar: “the Unspoken Scenario”. Another is, “Come over to the dark side.” In those analyses, the missing scenarios are “unspoken”–perhaps unspeakable or “dark”. But the missing scenario can also be a wildly positive view of the future.

Next post: There is no everybody — facing your biases about the world

Previous post: You can’t be what you can’t see