The future in the small thing 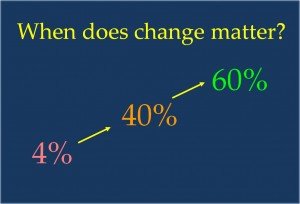 "Four percent," the senior agency leader said. And that stopped the roll forward of an enthusiastic riff by my futurist colleague standing at the front of the room, and stilled the nodding heads of the already-converted who'd decided this was all cool stuff.

We had been discussing what is sometines called "the new agriculture," niche farming for local consumption: small, specialty crop production sold, mostly, at nearby farm stands and gourmet groceries, and the emergence of urban rooftop farming in the mix.

This was a moment to assert the importance of the small changes coming in from the margins, and the potential for what is so far only a fringe development to not only grow in importance, but to influence the mainstream (the 96% of agriculture, in this case).

A futurist has a fascination with what happens on the margins, because that, so often, is where change comes from. Something small, and sometimes too small to catch the notice of an executive, or to pass muster as a trend that matters, may be the thing of most interest to the futurist.

And so we bide our time, asserting the importance of curious new developments, until our audiences begin to feel the reality of those things. We regularly want to burst out with, when suddenly people "discover" some trend, "That's what I've been telling you for nine years!" Our seeds need to wait for conditions to be right to sprout, unless we can nuture those conditions sooner.

And we can. There are ways to make the case for change, earlier.

For the grounded-in-today's-reality executive, a clearer view of the future as an outcome makes the difference. The thin wedge of change which we may detect now in a fringe trend or "four percent" phenomenon could be the mainstream reality of 2025. Painting a picture of that future year will show how things could play out, in effect, previewing the 4% becoming 40% or 50% or 60%.

To grapple with that possibility, we need to take the "four percent" and try it out as 60%. We need to paint a full picture of the "what if" outcome that would represent. And we need to do it together. It's not enough for the "crazy futurist" to imagine alone. It's far better for a group in an organization to put their heads into the future and tell each other the story of what's possible. That's why building scenarios–stories of the future told as if it has happened–is so powerful. Ant it's most powerful when it's done by a group of colleagues. Find ways to really get you and your colleagues' heads in the future, to deepen the view and the sense of outcomes that are out there. That will make the distant hints of change into something useful–early awareness of the potential future.

Thoughts on the power of scenarios: Why I love introducing scenario thinking to people

Examples of scenarios: Exploring the Future for Education: Three Scenarios for 2025

Previous post: The future of education: How for-profit business will reshape education