The foresight gap: What too many organizations get wrong 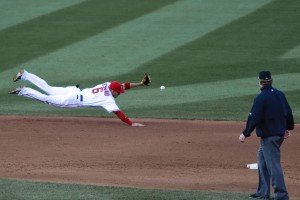 Businesses aim close. Too often, a business’s view stays on its current realities and where the business is excelling or struggling. The mindset is near-term and management aligns its tools to support that near-term view. This creates a gulf between the challenges and opportunities of the future and the demands of the status quo. It is a foresight gap.

The problem is endemic. Business rewards executives for improving the current business model and processes, but too rarely for charting a smart future course. Businesses measure results with tools which lock them in to present-focused, incremental improvement. That leaves out positive action around change that will shape their destiny in the longer term.

Ideas and behavior around risk create the foresight gap. Baseball offers an analogy. Sometimes a ballplayer who tries to do something hard, like catching a ball that requires him to lunge far to one side, fails at his attempt. The umpires give him an error for not catching the ball. Another, less risk-taking player might not try for the tough catch at all, letting it go by. And then the umpires may not award an error, presuming the ball was un-catchable. The game punishes risk taking and rewards risk avoidance. Business is like that.

As in baseball, businesses tend to punish risk takers when things do not work out. But they reward executives who stay the course. And though staying the course is a poor futures strategy, the business considers taking a longer-term view to be a move into uncertain and risky ground. The business instinct is to pull back from that longer view. Thus the rewards and measures of success are misaligned.

The foresight gap is rooted in these ingrained habits. But it is also true that business leaders often do not know enough about how to look at the future, nor what to do about what they see on their five-, ten-, or twenty-year horizon. That incomplete knowledge leaves them not understanding what foresight is, how to use it, and what to expect from it.

We need to adjust three critical factors to close the foresight gap:

First, we need to encourage a longer view. The conversation in any organization should sometimes be about five, ten, and twenty years hence. That does not leave behind the present and its tactical needs. But it begins to connect the organization’s longer-term success with present action. The future view gives present action a direction other than simple continuity, and it helps business reevaluate, at intervals, its present course.

And what is that future view like? It is an understanding of a range of possibility which must be less sure the further into the future the business looks. But uncertainty about that future should not shut down a consideration of the possibilities.

Second, a business needs to recognize the executives who take a longer-term view for their wisdom, and not put them under suspicion for embracing what is uncertain or unpredictable. Business needs to get comfortable with acting without complete certainty; it is not possible to make good strategy otherwise. The executive who thinks about the future should get validation and the ear of colleagues. But better still; develop the instinct for the long-term view across the leadership of the organization.

Third, the organization needs to get good at monitoring, interpreting, and responding to change. Any organization has a radar screen. That screen by default shows the things that are obvious and clear for the organization: its operations, constituencies, markets, partners and allies, customers, etc. The executive who attends the sector’s conferences, reads the sector’s newsletters, and so on looks like a good leader. But there is a second radar screen that represents the long view and the future success of the organization, and too few organizations have one. That second screen shows future social, economic, and technological changes that have not yet impacted the organization, but will.

Closing the foresight gap means establishing that second radar screen. It means opening up thinking to allow in things that are not yet shaping the business. It means letting in speculative views of possibilities, even when they do not match current thinking and current understanding of the sector or marketplace the organization plays in. Some part of strategic thinking will always be conjecture, and some part of it will always be rooted in a range of possibilities without the surety of prediction.

The foresight gap needs closing, and smart organizations will work to close it by getting smarter about the future, but also by loosening the tight reins they hold on themselves and their leaders. And those organizations will be the ones that win in the long term.

Next post: The future of education: How for-profit business will reshape education