How to break free of difficult history 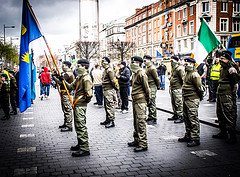 Difficult history is a historical legacy, often of conflict, that still shapes our behavior and interactions. In the United States, there are the lingering effects of the Civil War, even 150 years later, with its legacy in Federal/state and sometimes, North/South distrust, and the history and legacy of slavery. In post-apartheid South Africa, there is the legacy of a system which still shapes relations among the ethnic groups of the country. The world is full of other examples.

Foresight, including shared visions of the future, can make the difference in carrying people past, or at least counterbalancing difficult history. Peter Schwartz, in The Art of the Long View says that scenarios of positive futures helped South Africans see past their divisions as they moved to take apart the apartheid system [See earlier post].

Ireland, of course, has its share of difficult history and in particular its history. Ireland's President Michael Higgins, in speaking on an April 2014 state visit to the UK, worked carefully to acknowledge the "common ground we share" [LINK].

A powerful way to build and bring focus on common ground, and to work past difficult history, is to explicitly build those shared views of the future, ideally, positive, intentional futures that serve the interests of what have been parties at odds with one another. This is the one of the powers of foresight.

As President Higgins put it:

"As both our islands enter periods of important centenaries we can and must reflect on the ethical importance of respecting different but deeply interwoven narratives. Such reflection will offer us an opportunity to craft a bright future on the extensive common ground we share and where we differ in matters of interpretation to have respectful empathy for each other's perspectives."

What you can do if you have difficult history to dea with:

1). Acknowledge your difficult history, surface attitudes and assumptions about it in open, honest conversation. A critical part of this is finding the balancing between honoring history and getting past it.

2). Work with the key stakeholders or factions to find common ground in the future: scenarios of future success that can be shared.  Apologies and reparations may be a part of this, but the great strength is in new thinking–thinking about the future we will share. Dwelling on a dark history without that leaves work undone. Your efforts and energy are best focused on counterbalancing the difficult history that continues to influence things with postive and strong images of the future.