Foresight: Seeing the big in the small 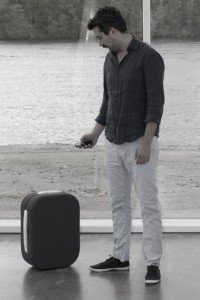 A problem I face when deciding what ideas about the future to share is that people tend to have heard of most cutting-edge things I might tell them. Why is that? It’s because the future is well known, or at least specific things about it are.

But sitting just behind the “famous” truths about the future is a lot of critical insight on what the changes that are so well known could actually mean. These insights are most often about a changed system or complex of systems.

Here’s a great example. Designer Rodrigo Garcia Gonzalez has developed a rolling suitcase that follows its owner [Link]. The suitcase has a motor, and uses three Bluetooth receivers to triangulate on the owner’s smart phone. What a great idea. Some will find it fun, some mind-boggling.

But when we see a development like that, we don’t really know what it means. What does that add up to? Does it change our lives that much? Does it change anything more than the way you take your suitcase along? Or is it just a suitcase that follows you?

It’s the bigger system that smart things like this suitcase is a part of that matters, not a singular, however delightful, technological development. The work of foresight includes not just learning about a technology like that, but seeing how it fits with other emerging change, whether it represents a narrow example of a much greater possibility. One task is to say, what if there was more of that sort of thing? What would it mean? Another is to say, does this technology prove possibilities that could spread to other uses?

So put that smart suitcase in a wider context. It’s about technology that serves us: quietly, obediently, automatically, conveniently. It’s about adding smarts to ordinary things so that they serve us better. It’s about technologies that anticipate our needs, and respond to them flexibly. And its about harnessing automation outside of the factory–for daily, ordinary, human use.

This way of thinking has helped people move from the notion of a 3D printer — device that “prints” objects — to the idea of additive manufacturing, where complex objects can be produced flexibly, even custom, by laying up material, instead of carving it away or molding it. It led to further thoughts: if you can print a plastic object, why not food, or human tissues?

So when you see news like the story of Hop! the following suitcase, the thing to do is to think: what else could be like that? What is this helping us learn to do and learn to imagine. So we can thank Rodrigo Garcia Gonzalez for a smart suitcase, but we can also thank him for stirring our imaginations and inspiring more ideas and innovation.