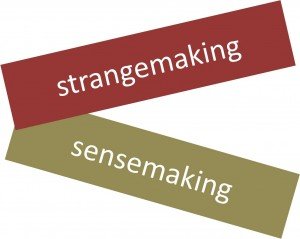 At the 2012 Association of Professional Futurists Professional Development day in Toronto, July 2012, we explored design thinking and its role in futures. In the orienting discussions that led off our design work, we talked about the roles futurists play in helping people explore our changing world and what it means. And that role is a frequent topic of this blog, too.

I had not before used the term “strangemaking,” but our design-focused presenters, including Greg Van Alstyne, of the Ontario College of Art and Design, Strategic Innovation Lab, and Lloyd Walker, Precurve, who is a long-time futures colleague, talked about how part of the work of foresight is “strangemaking” which designers sometimes refer to as meaning to make the familiar, strange.

Exploring the future should include strangemaking. And then, on the other hand, it should also include sensemaking. I guess that looks like a contradiction, but the view is clear: when an organization is too focused on what it knows, too narrowly following and building within the familiar, it needs to think new thoughts, try new ideas, and so make the familiar strange for a while.

Meanwhile, most organizations are confronted with an awful lot that is strange or unclear. Usually that is what lies in the blurry periphery of what they know and can see and understand. For them, a big need is sensemaking. They need help, help that a futurist, among others, can offer, in getting clear on the changes surrounding them and in finding new ways of thinking about their interests, their stakeholders, their markets, and so on.

So, on balance, what is my job as a futurist? I think it is to draw the strange in for a close look, let it be strange and new to people, but then before long to help them understand it.

1). Make the familiar strange, by showing some surprising but plausible ways it could change, keeping the focus on what isn’t true today but what could be true in the future. That will even mean spending time looking at extreme possibilities.

2). Make the strange familiar, not by avoiding it, or ignoring it, or trying to force it into something it’s not, but rather by framing up a view of the future in a way that helps people understand and interpret it.

That balance of purposes is a thought that futurist Peter Bishop, the leader of the University of Houston Futures Studies in Commerce program crystallized for our Toronto gathering. It’s not sensemaking or strangemaking, it’s both. Thanks Peter!

Previous post: The weaknesses and threats of SWOT analysis