Pollyanna had the right idea 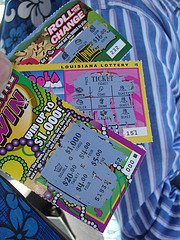 In a controlled study, researchers found people routinely willing to swap similar pens with others, but less willing to exchange lottery tickets. The reason? The lottery ticket in your hand has a potential future value which may—you don’t know—exceed that of another ticket. You don’t want to swap away a ticket that might turn out to be the winner. This happens even if the subjects of the experiment are reminded that probability shows either ticket has an equal likelihood of being a winner.

With pens, you are not likely to come out behind. A pen’s a pen, and neither your pen nor the other guy’s is the key to a future fortune. This shows how potential future regret shapes our decisions in the present.

So we have a tendency to anticipate having regret in the future. That means regret is not only a back-facing emotion, it also shapes our view forward, and so it shapes our future. The regret we feel can be about a missed future chance, an anticipation of failure, or an expectation that we will come up short in how we handle change.

The antonym of regret is satisfaction, and I would argue that anticipated satisfaction can be a powerful motivator for the future. But we have to allow ourselves to proceed with confidence armed with a vision of a positive future. That means that positive scenarios of our future are a strong motivator.

There’s not likely to be much of an outcome if you go around expecting the worse, starting up with your regret even before things have transpired. This sort of sour approach to the present and the future is nothing but destructive. In my view, Pollyanna had it about right—we need a positive outlook and we can help build that with a focus on the future that gets us to positive ideas about the future. Along the way exploring people’s fears, but also their hopes about the future will help the cause.

See also a recent Time piece, “The Optimism Bias” on how we have an optimism bias and why we should.

I’ve also weighed in before on hope, optimism, and the future: