Experiencing the future Part 1: Getting beyond analysis and changing minds

I’ve played with the problem on both ends. Before I became a futurist, I was intent on becoming an archaeologist, and studied archaeology at the bachelor’s and master’s levels. Over those years, I met a lot of archaeologists who went beyond books and field research to understand the past better. They tried out ancient technologies and lifeways. They were experiential archaeologists. 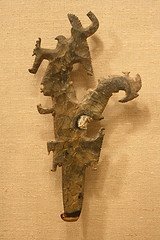 My own experiential effort was brief—I tried flint knapping—the shaping process used to make stone tools from cryptocrystalline stone (flint or chert). That gave me an appreciation for some of the finer specimens of stone axes, blades, spear points and arrowheads we were excavating at a Woodland Indian site in southern Illinois, and the amazing Mayan eccentrics (see picture) I learned about when working in Belize. The main results of my experiential effort were cut and blending hands. But I gained an appreciation for ancient technologists.

A recent article in the New Yorker brought this back to mind (abstract here). It tells the story of Lucy Worsley the Chief Curator, at Historic Royal Palaces, a non-profit that runs the Tower of London, Kensington Palace, and Hampton Court Palace, Kew Palace, and the Banqueting House at Whitehall.

Worsley’s work is about bringing to life the lives of Britons (mainly royals) from centuries ago. Among the big experiences she has worked on is recreating and eating a meal served to George III on February 6, 1789.

Leading edge futurists are doing things like this too, and their efforts are a superb way to bring the future alive—to get people beyond the analytical to ideas (experiences) about the future they can actually feel and understand.

Futurist Stuart Candy is one of the field’s leading practitioners. He frequently blogs about experiential futures at The Sceptical Futuryst. Stuart has developed techniques around experiential futures scenarios and recently completed a PhD on that topic, “The Futures of Everyday Life: Politics and the Design of Experiential Scenarios.”

Lucy Wolsey—the experiential historian—has caught a lot of flack from more “serious” historians who think her efforts are silly, misleading, etc. The experiential futurist risks the same thing, with the most likely push-back being from business clients who think their people won’t tolerate things like role playing, and that good business behavior is about PowerPoint briefings in a meeting room, not going places, seeing things, and trying things.

There is at least one blog that focuses on what’s wrong with “experiential archaeology”, it’s called Bad Archaeology. Its authors make the reasonable point that “We cannot shake off the contemporary nature of the experience” when trying to simulate the past. And further, “When we experience places like Stonehenge, Giza or West Kennet, we are experiencing 21st Century, contemporary places.” I think these guys go too far, and they’ve painted themselves into a philosophical corner. There’s plenty of learning and insight to be had by standing at the foot of the Great Pyramid.

The same problem applies to the future, our presentist tendencies are unavoidable as we try, pretend even, to experience what the future might be like.

But I’ve seen over the years that to shake people loose from their fixed thoughts about the future, and to get them to examine their assumptions, you have to try to take them new places, and analytical thinking won’t always get that done. Experiences help change minds.

Lucy Worsley, debating the validity and value of experiential work, told a scholarly audience: “I don’t feel my job will be done until history is as popular as the ‘The X-Factor.’” I am sure they hated that thought, but she’s right, you get more done if you engages people’s minds and hearts, whether trying to have them understand the past or the future.

Not being from a traditionally, academic-based discipline, futurists are less persnickety than historians about the value and validity of experiences. But these efforts can still be a hard sell. It’s worth trying.

Note: A little more on my overarching point about experiences is in my post Two sides of foresight work.

I’ll follow up straight away with ideas on how you can build the experiential side of foresight.

Next post: #Consumer4sight No 6: Greening it up by choice or by force