How to work your way past your thinking blockages 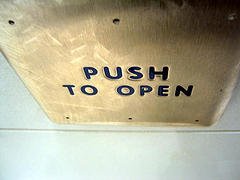 In trying to improve an organization’s ability to think about the future, there are some big, built-in constraints. The critical elements that stand rigidly in the way of new thinking include: the corporate culture, established/legacy systems and programs (including business models), and language.

The organization’s language may be ill-equipped to let it talk new talk, but scenarios create a new way of talking, with names for the scenarios and names for things in them having the power and potential to be part of how the organization’s people talk about the world and how it is changing. For example, a few years ago I worked with public library professionals on developing scenarios. One that we played out was called “Last Bastion of Books.” Another was “Barnes & Nobleization.” The scenarios gave them a clear view of possible futures, and a short-hand for talking about their future.

In my experience scenario building can help loosen up some of these constraints. Working with groups in the organization to build scenarios can jump them past the barriers of the current systems and business models, by creating new ones to think about, fully wrought. Because you can jump thinking out 10 or 15 years, it’s possible to set aside the immediate, too-tangible systems and practices the organization depends on, and consider things transformed.

Ultimately, but establishing a sort of future mythology in the scenario narratives, it’s possible to at least open up some new thinking that could enable the corporate culture to accommodate the new thinking. It’s this last payoff that I believe is most critical to most organizations. Give it a try, and call if you need help!
Related post: Why I love introducing scenario thinking to people
See also, posts under category "Thinking Differently"
Image: alykat, via Flickr, cc attribution license

Next post: I am a futurist. Leave off the quote marks!

Previous post: Don’t be a sheep in wolf’s clothing