Failure to think in systems 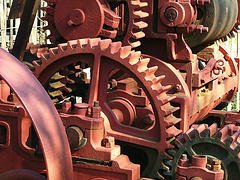 Far too often, people propose solutions to problems large and small that are narrow and shortsighted. they take a binary view: cause and effect, A by itself leads to B.

They fail to think about how things are part of much bigger systems with complex interacting forces, players, and parts. This happens in businesses, in families, and at the regional, national, and global levels.

Sometimes this is simple narrow thinking or ignorance, but often today, at least in the US, it comes from partisan politics. How the public understands the issues or how opponents will characterize your decision later becomes more important than what's really true. And for similar reasons, politically, the short term usually beats the long term.

That is why shutting down the US Federal Government looks like a reasonable tactic to some people. They have not thought about how it would affect things beyond the political tussle underway right now. In fact, a US Federal Government shutdown would have a steep price tag–rather than reducing the budget deficit, it would increase it.

Some other examples. In the budget debates, it's easy to say that US aid to poor farmers in Asia and Africa is something we just can't afford right now. Their plight–however unfortunate–should not be our top priority, when our resources are limited, we should invest first at home.

Yet that aid is integral to critical things: the supply of affordable food in those countries and in the global marketplace, political and economic stability in multiple countries, the ability of people in those countries to afford US products and services, and so on. Investing in African poor farmers is investing in the US.

Arguments about issues like this are often touted as "common sense." Usually that means using a rationale that comes from a different context. For example, politicians like to say "I have to balance my checkbook each month, why shouldn't the Federal Government have to balance its budget?" But clearly, the US Federal Government and an individual's family finances are not the same thing.

Such arguments also tend to focus on the near term at the expense of the long term. Another example: arguing that we cannot stop burning coal for energy because too much of our electricity is generated from coal to stop using it. Doing so would weaken the economy now and in the next few years (never mind the critical need to move to alternative energy and the potential growth from transforming our energy systems).

The response to failures to think in systems has to be to regularly, and clearly offer a "Yes, but….." and to show people what else is affected, and what else is at stake. It will also make a difference to elaborate on the future outcomes of a decision by describing what is likely to result in the system and related systems that the decision will affect. A scenario or set of scenarios can be a powerful tool for doing that.

Previous post: What to expect when you go futuring