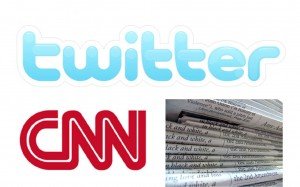 I am writing this in the midst of the January 2011 revolution in Egypt. The unfolding events in Egypt are much more interesting, and, I would argue, clearer on Twitter than on CNN. This is a surprise. Most of what’s on Twitter is not posted by journalists, nor by people who even pretend to be reporting objectively, or checking sources. They simply share what they see, the best among them saying when they are unsure about something. And they let their emotions be part of their postings.

I have followed, for several days, a dozen or so Twitterers who are in Cairo, often among the protesting crowds in Tahrir Square. Their updates have led news from CNN, BBC, and others by as much as hours, and there is nothing like the completeness of view the Twitterers give in the news updates on US Cable TV and on the cable news or newspaper websites. The exception is when those traditional media journalists share their own Tweets.
The TV networks are, by contrast, weak vessels of what’s happening, and their strengths—offering context, analysis, and expertise, can blunt, suppress, and sometimes distort what seems to be the truth about what is happening in Egypt. They report, quite even-handedly, what the different factions think, and that allows in not just opinion, but deliberate distortions and distractions. Too often when there’s fresh news, and first-hand views coming from Egypt, they have lined up a New York, or Washington-based expert to tell us what’s happening. They bring in a geopolitical angle—the conversation Henry Kissinger would want to have—instead of a closer focus on what is actually happening. And often they seem simply to be wrong.
We don’t yet have the journalism of the future figured out yet—that seems to be happening right now, with the interplay between new forms of sharing like Twitter and conventional journalism. But it’s clear that instant, eye witness reporting and the first-hand views that show up on social network sites will be part of it, and it should. I think the networks and traditional news media recognize that–they're reading the Tweet stream too.
Newspaper image: DRB62, via flickr, cc attribution license

Next post: The short-term view and the long-term view