Talk to the frog–the fable as told to me 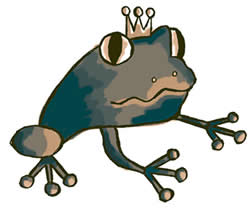 I wrote a while back a piece called “Talk to the Frog.” Mary Jane Naquin, of Informed Futures, Houston had shared a fable at the opening of a World Future Society General Assembly she chaired in Houston some years ago. I have always remembered the fable as a great way to make the point that we always learn new, unexpected, and valuable things from what we think are unlikely sources. The lesson of the fable of the frog is the lesson at the center of this blog, Foresight Culture. We have to open our ears, our minds, and our hearts to new things, and keep them open.

Mary Jane doesn’t claim credit for the story, but I give her credit for sharing it with me and showing me how to use it. She found the text she has used for telling the story the other day, and sent it along. With her kind permission, here it is:

In another time, another place, there was a wonderful land where lived a king (or perhaps it was a queen), who had three sons (or perhaps they were daughters) oh well, it doesn’t matter.

It was the time of their lives at which they were of age to seek the Future and to search for the Holy Grail… and so they did.

The charmed firstborn left the castle on a fine horse, and rode confidently along the path leading from the palace….

When out of the bushes a frog jumped into the middle of the road!

Out of the way – said the prince – be gone frog – I’m off to search for the Holy Grail and find the Future… and he brushed the frog aside and rode on….. He returned late that day, very disappointed and without success.

And some time later, the second son, the middle child did likewise, riding away from the castle at a quick clip, determined to find the Holy Grail and understand the Future……and as he rounded a curve in the path, there in the middle of the road sat a big plump FROG staring at him!

Oh ! said the prince – be out of my way – I’m on a mission to find the Holy Grail and understand the Future ….. and he too, swept the frog away and went on his journey. The second son returned late that evening, without the Holy Grail, and very confused about the Future.

And so it was for the youngest to set out to seek the Holy Grail and learn about the Future. And later that day he rode happily out of the castle ground, looking about, and enjoying the journey. Near the end of the path leading from the castle a frog popped out of the bushes and landed smack in the middle of the road….. Oh my, said the prince … who are you? And what do you want?

The frog smiled broadly, and said I want you to come with me… I know how the secret of the Holy Grail and how to understand the future…… and so … you can imagine the rest of the story.