The power of the paleo future 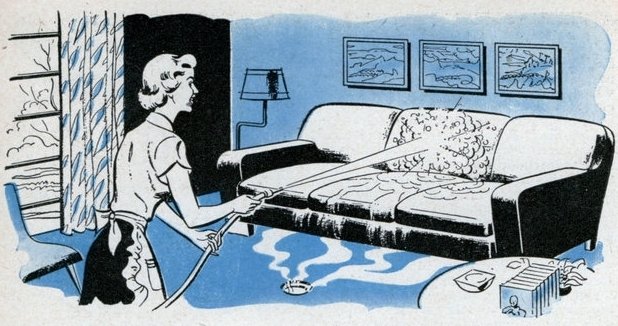 "Because everything in her home is waterproof, the housewife of 2000 can do her daily cleaning with a hose"  Paleo Future is a blog that explores past ideas about the future. Its authors mine old books and magazines, movies, and literature for what we used to think the future would be like. It’s a visually-rich and fun site to visit, and it can be insightful and instructive for people trying to improve how they and their organizations think about the future. You might find an image there that could be the basis of a discussion with colleagues about your organization’s future. I have long used the cartoon above, from Popular Mechanics 1950, in presentations to illustrate a simple, but essential thing about foresight—our tendency to extrapolate one trend at a time. The image (posted above) looked out 50 years to a future of homelife in the year 2000. The home and life shown is utterly unchanged from 1950, except that the materials and surfaces in the home are plastic, and can be cleaned daily with a hose. This is a classic example of assuming a single change for the future and holding other things the same. We do this instinctively—it’s hard to envision the future, so we tend to do it with just one big change played out against a backdrop that’s actually the present. Past ideas about the future that envisioned a time we’ve now lived through give us the chance to see how the forecast turned out, and consider why the forecaster might have been right or wrong. Equally interesting is when the forecast timing was all wrong and the ideas about the future, while they haven’t happened yet, are still interesting and provocative. For example, we still don’t have robotic household servants (Roomba aside), so even a 50 year-old forecast about them might include interesting issues and ideas to consider. You can take images and stories like those in Paleo Future and start a conversation with colleagues. Explore how and why the visionaries were right or wrong, or partly right and partly wrong. Then consider whether your ideas about the future share some of those flaws—maybe, like the Popular Mechanics forecaster, you’ve fallen for a one-trend future view.

Next post: Why I love introducing scenario thinking to people